Tomas will start the Miami Masters with a second-round clash against Spaniard Daniel Gimeno-Traver. Tomas got a first-round bye, while the 48th-ranked Gimeno Traver knocked out Denis Istomin 6-2, 6-4.

it's a first meeting

On Grandstand, there are four matches; with No. 8 Richard Gasquet, who has a 4-7 tournament record and his best result was the fourth round last year (vs. qualifier Olivier Rochus). No. 20 John Isner, who has a 5-6 record in Miami with his best result the fourth round in 2011 (vs. Ivan Dodig). No. 14 Milos Raonic, who is playing here for the third time (1-1), withdrew prior to third round match year against Andy Murray (vs. qualifier Guillaume Ruffin); and No. 4 Tomas Berdych, who was a finalist in 2010 (l. to Roddick), has a 17-8 mark here (vs. Daniel Gimeno-Traver).

Fourth seed Tomas Berdych overcame Daniel Gimeno-Traver 5-7, 7-6(3), 6-2 in two hours and 14 minutes. Berdych has reached the quarterfinals or better in his five previous tournaments this season. The Czech was the runner-up to Andy Roddick in the 2010 Miami title match. 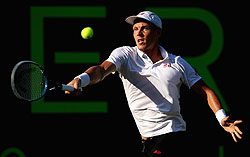 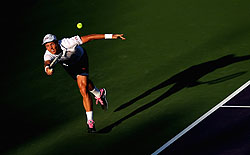 Tomas Berdych in action against Daniel Gimeno-Traver of Spain during their second round match at the Sony Open at Crandon Park Tennis Center on March 23, 2013 in Key Biscayne, Florida. 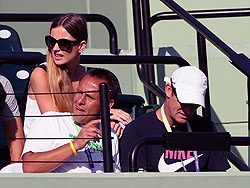 Ester Satorova girlfriend of Tomas Berdych watches her boyfriend as he plays against Daniel Gimeno-Traver of Spain during their second round match at the Sony Open at Crandon Park Tennis Center on March 23, 2013 in Key Biscayne, Florida.

Q.  Can you describe what your feeling is to walk on the court to play Roger Federer?

TOMAS BERDYCH:  I said that many times, for me it's kind of a final of the tournament, you know, or celebration of tennis, I would say, because it's always great to be with him on the court, you know, with the results that he achieved and what a star he is.

It's every single time for me, you know, "the" match, you know, to be ready and to be really focused on.  So, yeah, I like those matches so much.  I would like to play with those guys every time.

Q.  What's your most memorable match with him?

TOMAS BERDYCH:  Well, definitely is the one from Wimbledon 2010 where it was the first time I beat him on the Grand Slam.  You know, it was Wimbledon, so it was even more special to me.

Yeah, it was first time that I won actually on the Centre Court in Wimbledon, as well.

So, you know, it's been really a lot of, I would say the first moments, and then, yeah, beating him there was something really incredible.

TOMAS BERDYCH:  Well, it's from actually the Athens that I beat him first time.  We came to the court for the warmup before the game, and actually we had a ‑‑they sign us on the same court at the same time.

It was actually the first time that I ever saw him that close.  I was sitting next to the court watching him warm up and I was saying to my coach, What am I going to do with him?  What should I do?  I was seeing him first time how he sees the ball, how fast he plays.

My match with him was in couple of hours.  I was like, Okay, what I'm going to do?  Actually I went on court to play him and I beat him.  It was incredible for me.

TOMAS BERDYCH:  Well, like really met personally?  It's tough to say.  It's gonna be from the days that I actually get on tour and get to the big tournaments to play with these guys.

So not like ‑‑I mean, I would be a kid and someone who introduced me or bring me to, I don't know, Andre Agassi and said, like, Look, this is Andre.  I would be like this, as a kid.  (Indicating short.)

So it was a time that, I don't know, I start to play the bigger tournaments.  Then I qualify for my first Grand Slam in US Open, I believe.  Yes, US Open.  And then I have been part of the draw with all of the guys.  So sharing the same space and everything.

So that was probably the first time.

Q.  What's the greatest moment of your career?

TOMAS BERDYCH:  Greatest?  Well, I would say that‑‑ well, it's been the final of Davis Cup that we played in Prague.  That was really something incredible with all the coincidence around the 100 final that we played at home we won after that long.  And how it went, it was really, really incredible.  Incredible for me.

Well, it's a team event, so for myself, it's gonna be the final of Wimbledon.